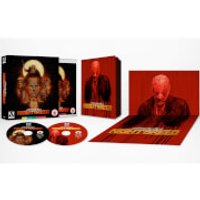 This product is sold by Zavvi

From the mind of writer/director Clive Barker - the macabre visionary responsible for Hellraiser and Candyman - comes Nightbreed, a nightmare-induced fantasy set in a world like nothing you've ever experienced before... one which will leave you questioning who the real monsters are. By night, Aaron Boone (Craig Sheffer, Teen Wolf) dreams of Midian, a hidden subterranean world where monsters have created a haven from humanity. Under pressure from his girlfriend Lori (Anne Bobby, Born on the Fourth of July), he attends psychotherapy sessions, unaware that his shrink, Dr Decker (Videodrome director David Cronenberg), is setting him up to take the fall for a series of violent murders. Convinced he no longer belongs in the human world, Boone goes in search of Midian - not realising that the real killer has plans for both him and the colourful cast of outsiders who call it home... The victim of studio interference and an unrepresentative marketing campaign, Nightbreed was poorly received by critics on its initial release and failed to ignite the box office, but has since undergone a radical reappraisal. Arrow Video is proud to present two versions of this depraved cult classic: the studio-approved theatrical cut and the reconstructed, reinvigorated director's cut, for the ultimate nightmarish viewing experience. Limited Edition Contents: High Definition Blu-ray (1080p) presentations of the 120-minute director's cut, transferred from the original camera negative, and the 102-minute theatrical cut, transferred from the original interpositive Lossless 5.1 DTS-HD Master Audio and uncompressed 2.0 PCM audio on the director's cut Uncompressed 2.0 PCM audio on the theatrical cut Optional English subtitles for the deaf and hard of hearing New audio commentary on the theatrical cut by critics Adrian J Smith and David Flint Audio commentary on the director's cut by writer/director Clive Barker and restoration producer Mark Alan Miller Introduction to the director's cut by Clive Barker and Mark Alan Miller Walking the Line Between Heaven and Hell, a new video interview with critic Kat Ellinger Speaking up for the Monsters, a new video interview with critic Kim Newman Tribes of the Moon: Making Nightbreed, an extensive documentary on the making of the film, featuring actors Craig Sheffer, Doug Bradley, Anne Bobby and many more Making Monsters, a documentary on the film's creature designs, featuring special makeup designer Bob Keen Fire! Fights! Stunts!, a video interview with second unit director Andy Armstrong Deleted and alternate scenes Monster Prosthetics Masterclass Cutting Compromise, a video interview with editor Mark Goldblatt The Painted Landscape, an exploration of the work of concept artist Ralph McQuarrie Matte painting tests Makeup tests Lost stop motion footage Extended torture scene Rehearsal test Theatrical trailer Rare TV spots Multiple image galleries, including early sketches, set photos, poster and pre-production art, stills from the UK launch party at Tower Records, and more Original screenplay (BD-ROM content) Reversible sleeve feature original and newly commissioned artwork by Gilles Vranckx Double-sided fold-out poster Limited edition 40-page booklet, featuring new writing on the film by author and critic Amy Simmons and an in-depth history of the film's development, release and rehabilitation by Mark Salisbury, co-author of Clive Barker's Nightbreed: The Making of the Film
More details from Zavvi

Follow Zavvi to get news updates and products on your homepage.

Zavvi is being followed by 0 people.

Specific details for this product: 3


No review added yet - be the first!

If you own this product already, please write a quick review to help others:


Do you think this would make a good gift?

Rating: (13 votes)
We do our best to make sure the prices shown on this site are correct but they are not live prices so please check on the merchant's site for the correct current price.