Show shops near me

Rating: (4958 votes)
Women's Clothing at New Look is a collection of affordable and trendy clothes at amazing prices. Shop online for this season's latest trends in Womens Dresses, Tops, Trousers, Jeans, Swimwear, Shirts, Footwear Jewellery and more.
The 'Inspire' range has clothes in sizes 16 to 24.

Rating: (30 votes)
For those of you who want up-to-the-minute fashion at affordable prices, M&Co. is the store for you! Offering all the latest looks for the whole family, including petite and plus sizes for the ladies, and with new collections arriving daily - there couldn't be a better time to shop for those fashion essentials. For those who would like to create a new look for your home as well as yourselves, take a look at the fantastic homeware range! 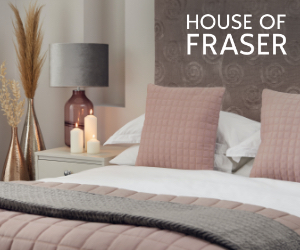 House of Fraser is Britain's leading retailer of designer brands and one of the best known names on the UK high street. With 61 enviable locations across the country, House of Fraser has presented customers with an unrivalled national department store for more than 150 years and is now offering the opportunity to buy online.
View all 8 Offers

Rating: (2 votes)
Etsy is a marketplace where people around the world connect to buy and sell handmade and vintage goods.

Rating: (7 votes)
Founded in Pennsylvania, Anthropologie now has several stores in the UK. Find beautiful clothing and accessories for women and delightful homewares.

Rating: (12 votes)
The Hut is a leading luxury online department store bringing you the very best from their breadth and depth of quality, luxury brands. They specialise in fashion, homeware, beauty, and lifestyle products. Whether you're looking to update your wardrobe, home, or even treat a loved one, they have something for everyone.

Rating: (43 votes)
M&S is one of the UK's leading retailers of clothing, foods, homeware and financial services with high street shops nationwide.

Online you can shop from Womenswear, Lingerie, Menswear, Kidswear, Homeware & Furniture, Wine, Flowers and Gifts and Entertainment.
View all 6 Offers

Rating: (0 votes)
Over the past three decades, Rokit has recycled over a million tonnes of discarded clothing and accessories to become the highly regarded regular haunt for style savvy Londoners with a worldwide online audience.

Rokit burst onto the scene with a stall in London's iconic Camden Market in 1986 specialising in vintage denim thrifted from American cowboys. The demand was so fierce that within a few weeks the stall was exchanged for a two storey shop on the high street and the Rokit vintage brand was born. Three further stores have been opened in Brick Lane and Covent Garden, each bringing Rokit's diverse and unique product range to a loyal band of regular customers, celebrities and tourists alike.

Rating: (0 votes)
For more than three decades, Zee & Co have brought Designer fashion to the high street. Introducing hundreds of exquisite labels to you through 5 stores and now online. Their designer collections include Menswear, Womenswear and Childrenswear.

Established in 2011, hype began as a self-funded project, designing printed clothing and accessories. After winning a t-shirt printing competition, hype had its first batch of stock, which sold out in a matter of hours. With the use of social networking, hype quickly developed into something that could no longer be tamed from the single room it was created in. Within months, hype had started to evolve into one of the UK's most recognisable brands.