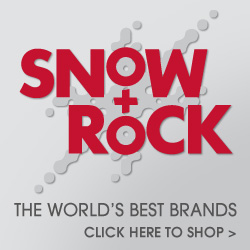 Snow and Rock are the UK's No.1 ski clothing & equipment retailer with 23 stores nationwide and have been in the wintersports business for nearly 30 years.

With a superb retail presence in the City, a concession in Harrods and stores nationwide, the Snow+Rock brand and the brands that they carry are the best. They stock Kjus, Schoffel, Eider, Spyder, DC's, Burton, Westbeach and many more.

Follow Snow and Rock to get news updates and products on your homepage.

Snow and Rock is being followed by 0 people.

Update Postage Details
Be the first to write a review of Snow and Rock:

Snow and Rock has 33 stores in the UK in our database.

The Boardwalk, Portsmouth Show on Map


Products from Snow and Rock

User Opinions of Snow and Rock

Snow and Rock is currently ranked 929 in the directory.
Last month its rank was 37.

Save Snow and Rock to MyShops
View all the MyShops lists


News Feed for Snow and Rock

Updated The link Snow and Rock was updated 279 days ago.

Updated The link Snow and Rock was updated 285 days ago.

Reviews of Snow and Rock

Special Offers for Snow and Rock